Our company “Van den Bergh Motoren”, better known as Le Patron, was founded in 1988 by Godfried van den Bergh. Prior to this, Godfried successfully completed an education as Primary Motorcycle Technician. Le Patron is based in Ophemert, The Netherlands: a small town but its presence is widely known.

Already since 1978, significant experiences has been gained by working on motor cycles but soon enough also on Citroën 2cv and other Citroens’. It was in this period when the interest in 2cv based kit cars started to grow. Around 1980 we modified the first vehicle.

In 1991/1992 we succeeded in obtaining type approval for The Netherlands for the Citroën 2cv based three-wheel kitcar Lomax 223. We then became official Lomax Importer. The import activities were housed in a second company, called Van Den Bergh Import.

In 1997 the Lomax import ended. By then, Lomax was a well known kitcar, especially thanks to Wim, who’s activities with his Lomax three-wheeler caught the attention and surprise of many people.

Not importing Lomax anymore, meant a new era for us. We wanted to develop an improved ‘Lomax’ kit car for the same audience, with cosmetic changes and technical improvements as a starting point. In August 1997, the name “Le Patron” was chosen even before the first vehicle was built, kicking off the marketing campaign. In 1998 the sale of the Le Patron kit car started. In a very short time period, the Le Patron sales exceeded the sales of Lomax vehicles.

Mid 1999, Toon Visser leaves the company and moves to France. The activities of Van den Bergh Import were then taken over by Van Den Bergh Motoren and since then the two companies continued to be one company. 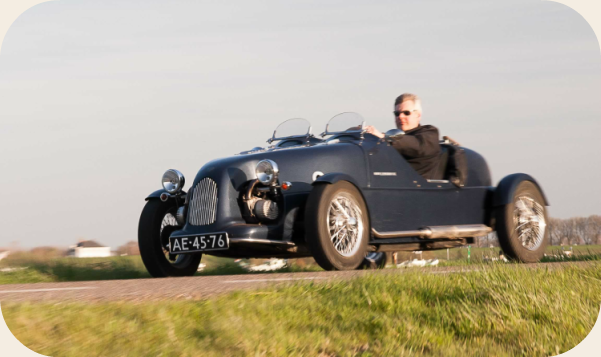 Vendors are appointed in various countires: Germany, Belgium and France. Other countries were served from the head quarters in The Netherlands.

Sales in the United Kingdom, Belgium and France

In 2001, the first Le Patron kit car in England was sold. This was a victory over Lomax. Meanwhile, in Belgium the team is working hard on obtaining approval of the authorities, and in 2002 there are good prospects for admission in Belgium. In 2003, it is possible to get an official ‘daily license plate’ on the Le Patron in Belgium. The approval of our kit car is a fact. Later, the Belgian Le Patrons are being approved as ‘oldtimer’ vehicle.

Due to the growing sales of the Le Patron on the continent, Lomax got into trouble and the company was acquired by another company at the end of 2003. During 2004, Lomax England went bankrupt and in the same year a Le Patron wins the cup for the most beautifully built Citroën kitcar, in Stoneleigh, UK. The Le Patron in England is now definitely a fact.

A few months later, the first Le Patron is sold in France. The prospects for approval are better than ever and the Frenchman cannot wait to build. Meanwhile, there are several Le Patrons with license plates in France, but inspections remain a difficult story.

Following the television appearance of the Le Patron, the organization of the European Motor Show Brussels asked us to come and present the Le Patron at this famous show. Thus, in January 2008 Le Patron is at the Brussels Motor Show. It is an unprecedented experience and after the Brussels show the sales in Belgium are going faster than ever.